This page was initially set up to document the infringement that has taken place on some of artist Mark Laliberte's 1997 Pillow Scenes photographs by Saskatoon artist Bart Gazolla, which he was shopping around to galleries as part of his 1999 series 'Adam's Second Wife'. Many of his 'Untitled' epson print images were directly sourced from 8" x 10" b&w photographic prints given to him of Laliberte's popular work 'Undertechno' (professionally exhibited as a 20" x 24" image) and from outtake images from the photoshoot that generated the 'Undertechno' image. Mr. Gazolla was contracted as a model for this shoot, at which time he signed a Model Release relinquishing all rights to the imagery, or any future sales of said images. This photo shoot was instigated by Laliberte for the purpose of generating artwork intended for gallery exhibition. It was not done as a collaboration, it was not done to generate imagery for Gazolla's future personal pursuits! At no time did Laliberte ever work for Gazolla, and at no time did Laliberte ever give permission to Gazolla to use his imagery in the creation of any artwork. Mr. Laliberte is NOT a commercial photographer (though he has in the past done quite a bit of commercial work, for which he was always payed quite handsomely, thank-you very much!) and he takes offence to any blatent infringement on his copyright, and in the undermining of his imagery within the gallery system!

Detailed explanation of how this all happened:

It started with a photo shoot...

In 1997, while Mr. Bart Gazolla was attending the University of Windsor for a BFA degree, Laliberte had already begun working on his professional career, showing in Canadian artist-run centres, etc. The project that he was focused on at that time was a series of photo-sound hybrids called 'Pillow Scenes'. As part of his process, he was working occasionally with friends, often times with strangers, to pose as 'characters' for these theatrical studio-shots. In 1997, one of the models he worked with was Bart Gazolla.

The session took a single evening at which time Mr. Gazolla posed for 3 or 4 rolls of 120 size film (a total of between 36 and 40 shots). As per his process, only one or two of these images would be used in Laliberte's final series, whichever image spoke to him in terms of next creating an interconnected audio soundscape. As with all of his models for this project, Mr. Gazolla was asked to sign a "Model Release" and was paid with a print of the work, as agreed to before the shoot. Since Laliberte was a little more familiar with Mr. Gazolla than some of his other models, when he delivered the print, he decided to give several different prints from the shoot as an extended gesture.

From there, Laliberte went on to create a final 'Pillow Scenes' work titled 'Undertechno', which has turned out to be one of the more popular images in the series. Since 1997, it has been shown in many solo and group shows across Canada and the United States. It has also been featured on the cover of the first monograph published about this series titled 'PILLOW SCENES 1-2-3' put out by Hamilton Artists Inc, Hamilton, ON ISBN 0-9698141-8-6 in 1998. Since then, a 2nd monograph and a CD catalogue relating to this series have also been released. 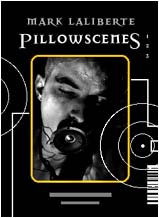 Since the time of the photo shoot, Mark Laliberte has really not had much contact with Bart Gazolla. Gazolla went off to attend grad school in Saskatoon; he participated in a book Laliberte was putting together for Windsor's Common Ground Gallery (titled 'The Windsor Salt'), and they spoke via email about that book project a couple of times in 1999, that's about it. During those brief email conversations, no mention was ever made that Mr. Gazolla had started to use Mr. Laliberte's imagery as the basis for a new body of work.

In early 2000, a mutual friend Ms. X (who has asked not to be named) directed Laliberte's attention to a website documenting Gazolla's gradshow, at which time he first encountered images in which a significant portion of the works we scanned / cropped / flipped / altered versions of the 'Pillow Scenes' works he had created using Mr. Gazolla as a model (the rest of the images were similarly appropriated from the Canadian artist Evergon, for whom Mr. Gazolla had also posed at roughly the same time). Not at all pleased, but not wanting to jeopardize Gazolla's newly obtained MFA degree, Laliberte asked Ms. X to pass a message to Gazolla that he was not impressed with this infingement, and that he did not want him to publicly pursue exhibiting this work. In retrospect, Laliberte concedes that he should have dealt with Gazolla directly and more aggressively on this matter (though he has been assured by Ms. X that she did indeed pass on this message).

Since that time Laliberte has come across these works on a number of occasions: first, in Gallery 44's 'Proof' Emerging artist show (Toronto, ON) in 2000 (ironically, he had submitted a few years before with his Pillow Scenes work -- including the very same image that Gazolla had sourced in the displayed work -- and was not accepted at that time), and again he unfortunately dealt with the matter pretty passively, exposing the plagarism to the gallery attendee and asking her to inform both the curator and the artist to his objections at the display. The show came and went.

Next, he had the displeasure of applying to Forest City Gallery's 'Cleaving The Body' exhibition (London, ON), being turned down, and then seeing on an advance press release that Mr. Gazolla had been accepted into the exhibit with recent "self-portraits"! This time, Laliberte more agressively contacted the gallery stating in advance that he wanted a message passed on to the both the guest curator Bev McNaughton (incidentally a close friend of Gazolla) and to the artist himself that he DID NOT want any works built off his original images shown, trusting that Mr. Gazolla would still have other works to show. In the end, Laliberte took the time to research the exhibit, and to his disappointment what was shown were the images sourced directly from his work!

It's a good time to visualize the proof on this matter. Here's an installation shot, showing a detail of the FCG "Cleaving..." show on the left, and Laliberte's original image on the right (object in foreground not significant, belonging to another artist):

FIG.01: In rip-off #1, minus the bacon scan and computer colouring,
this image is a pretty direct cropped appropriation of Laliberte's original 'Undertechno' work!
(please ignore foreground object in LS image, it's from an unrelated work in a group show)

FIG.02: in rip-off #2, again you will note that Mr. Gazolla has added a bacon scan and some computer colouring, and this time he's mirrored the image on a horizontal plane, but again the image is a very obvious cropped appropriation of Laliberte's original outtake work! NOTE THAT MR. GAZOLLA'S (CENTRE) IMAGE WAS RECENTLY FEATURED ON THE COVER OF A MONOGRAPH RELEASED BY A GROUP OF SASKATCHEWAN GALLERIES FOR AN EXHIBITION ENTITLED 'Viewing Distance' WITH NO CREDIT GIVEN TO THE ORIGINAL SOURCE and/or ARTIST!

FIG.03: Desperate for source material but with no shortage of bacon scans, Mr. Gazolla creates rip-off #3 from the same original source image; again he's mirrored the image on a horizontal plane and applied colouring, but one can plainly see that a majority of his image is still a cropped appropriation of Laliberte's original outtake work!

... other examples from this series ('Adam's Second Wife') exist, but basically Laliberte feels that he has wasted enough of his time building these illustrations in an attempt to make it quite clear to even the most visually oblique person that this infringement has indeed taken place! Visually speaking, it is obvious, and the circumstances have been explained.

From a business / legal point of view, Mark Laliberte holds the sole copyright to these illicitely sourced images, referring back to the original circumstances for which the photos were created and the existence of a signed Model Release form.

While it could be rationalized that as artists their 'statements' and/or 'artistic concerns' might be quite different (Mr. Gazolla has had some limited success by pulling the old "in this work the artist uses/manipulates his own image" card that is so apparently in vogue in today's art-photography circles), Laliberte must impress the fact that in a greater context ours is indeed an image-based culture, and that in that respect IMAGES are really what count most, not 'artist statements'.

Therefore, if you are a gallery that has had some form of previous relationship with Mr. Gazolla re: the work in question, your assistance in correcting this difficult matter by acknowledging Mr. Laliberte's copyright is requested.

Note that Mr. Gazolla has now conceded to stop showing these works publically.

For more information on Pillow Scenes, click this logo: